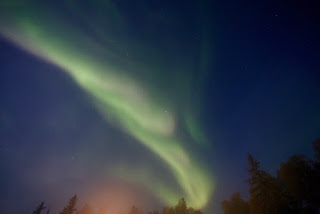 A week ago, I went up to Yellowknife to see the northern lights and I was not disappointed. We booked our trip though Aurora Village with their hassle-free arrangement and it was just that. We were also lucky because we saw the lights all three nights that we went to the Aurora Village which is a 30 minute bus ride from Yellowknife.

We did not want to weather temperatures of 40 below, so we took advantage of this small window of opportunity at the end of summer to see the Aurora Borealis. Only on our return, did we fully appreciate what a gamble we had taken and how lucky we were to have seen the lights three nights in a row.

The interesting thing was we were the only Canadians on the tour. All the rest of the people were from China or Japan and all the guides were bilingual. Our guides were great. One was from Australia and she had lived in Japan so she spoke English and Japanese. Our other guide was an American of Japanese heritage so he also spoke English and Japanese. Apparently, Canadians go on this trip in the winter time.

The Aurora Village was great. We were allocated a tee pee in this village and it was toasty warm inside. There were portable chairs and revolving two seater chairs set up specifically to enhance the viewing experience. There are some pictures on their site.

None of us had a great camera so we were no able to take photos of the northern lights or aurora borealis. When we were out dinning the second night we meet a Chinese family in the restaurant and they kindly sent us some of their photos.

The Aurora Village also had some day trips. They took us on a city tour which included the highlights of the old and new town areas. We saw the Legislature and their modern museum. We went on a boat ride on Slave. The lake had some colourful house boats. We also went to the Diamond Factory in Yellowknife. They had a short film and they talked to us. We also went for dinner one night at the Aurora Village. The meal was great. There was either Bison or local fish. I had the Bison and it was delicious.

We were in Yellowknife for 3 nights in a Day’s Inn in downtown Yellowknife. It was a nice hotel with a Filipino restaurant. There are quite a few Filipinos in Yellowknife. We found a few interesting restaurants in the city. The city was very spread out and most building were 3 to 5 stories tall. There were lots of residential areas also. We only saw one building that had 10 stories.

Melissa Myers, Travel Manager at Flight Centre at Yonge and King booked our trip. She did a great job.

On my other blog I wrote yesterday about High Liner Foods (TSX-HLF, OTC-HLNFF) ... learn more. Next, I will write about Smart REIT (TSX-SRU.UN, OTC-CWYUF) ... learn more on Wednesday, September 12, 2018 around 5 pm.

This blog is meant for educational purposes only and is not to provide investment advice. Before making any investment decision, you should always do your own research or consult an investment professional. I do research for my own edification and I am willing to share. I write what I think and I may or may not be correct.

See my site for an index to these blog entries and for stocks followed. I have three blogs. The first talks only about specific stocks and is called Investment Talk. The second one contains information on mostly investing and is called Investing Economics Mostly. My last blog is for my book reviews and it is called Non-Fiction Mostly. Follow me on Twitter. I am on Instagram. Or you can just Google #walktoronto spbrunner8166 to see my pictures
Posted by SPBrunner at 12:05 PM

I have google ads and this is the link to Google explaining how Google manages data in its ads products..

SPBrunner
I haven’t had a main stream job since 1999. To do this was a two prong attack of controlling spending and earning income. I exercise, then run each day before breakfast. I read in the morning, then I go to Starbucks for coffee. I work on my computer in the afternoon. Follow me on twitter at http://twitter.com/spbrunner.